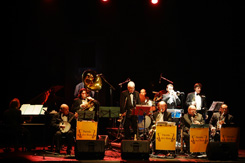 It all started in Buenos Aires, Argentina, during the mid sixties: a group of well trained young musicians got together and started developing a band to perform Traditional Jazz based in the original African-American musical concepts first heard in New Orleans at the turn of the 20 th century, and later in Chicago and New York. This is how the (now legendary) PORTEÑA JAZZ BAND was born.They were soon performing around Buenos Aires: appearances in Jazz Festivals, Radio Broadcasts and TV shows made them extremely popular amongst Argentinean audiences.

With the addition of several new members, the band got larger during the late sixties and early seventies, and also widened its repertoire including many arrangements based in the original music created by Fletcher Henderson, the McKinney Cotton Pickers and young Duke Ellington.

In 2005, and following serious discrepancies with the band’s current manager, most of the remaining members of the original group (Ubaldo Gonzalez Lanuza, José Ignacio “Negro” Mazzanti, Juan Carlos Moruzzi, Luis Parella Terriel, Raul Grano Cortinez and Marcelo Gallo) had moved to Spain and decided re-found the PORTEÑA JAZZ BAND: they are looking forward to celebrate the band’s 40 th anniversary playing to European audiences.

One Reply to “porteña jazz band”