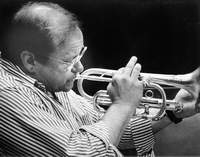 One of a talented Jazz family, Warren Vaché (cornet, trumpet and flugelhorn) was born in Rahway, New Jersey, USA, in 1951, and started playing Jazz during his college years and studied music with Pee Wee Irwin. Both his father, Warren Sr. and his brother, Allan, are acomplished Jazz musicians.

Vaché has played as a leader or sideman at major Jazz festivals and venues all over the world. The festivals include the Newport Jazz Festival, the JVC Jazz Festival, the Playboy Jazz Festival, and in the Nice, Marciac and Bayonne Festivals in France, the North Sea Jazz Festival in Holland; the Pori Festival in Finland, Perugia, Rome and Milan Festivals in Italy, as well as in most European countries, Japan, Australia and Hong Kong. Warren Vaché has performed in many top venues all over the world including Carnegie Hall, Lincoln Center, The Music Center of Los Angeles, Roy Thompson Hall of Toronto, Symphony Hall of Boston, Orchestra Hall in Chicago, Ordway Center of Minneapolis, Kravis Center in West Palm Beach, The Vienna Opera and Royal Festival Hall in London. Vaché’s club dates include: Condon’s, Jimmy Ryan’s, Michael’s Pub, The Blue Note, Sweet Basil, the Pizza Express and Ronnie Scott’s in London, Marianne’s in Bern, Switzerland, Blues Alley and the Blue Note in Tokyo. Vaché’s work on Broadway includes an on-stage appearance in Dr. Jazz and as musical director for the Richard Burton-Elizabeth Taylor revival of Private Lives. Television appearances include the NBC Today Show several times, Central Park West, Ryan’s Hope, and numerous PBS specials.

Vaché trained Richard Gere to play the trumpet for Gere’s role in the movie The Cotton Club. He also acted, performed, and musically directed the movie The Gig, and composed and performed the music for the movie The Luckiest Man in the World. Vaché has performed on the soundtrack for many movies, including Money Pays, Biloxi Blues, Simon and The Dain Curse, to name a few.

Vaché has proven his musical versatility by directing his own recording in duets, trios, quartets, sextets, and even a classical string quartet album which won particular widespread acclaim for its imaginative concept and superb performance. Vaché has also recorded and performed his own compositions and arrangements.

Warren Vaché has recorded as a leader for the Concord, Muse and Nagel-Heyer labels, amongst others.

Warren Vaché’s style is a rare blend of having learned true craftsmanship from a great variety of the classic players — Louis Armstrong, “Pee Wee” Erwin Roy Eldridge, Bobby Hackett, Clifford Brown, Blue Mitchell, Billy Butterfield, among others — and developed his own inimitable style that defies conventional labels. His style incorporates the complete range of the Jazz vocabulary. He has been described as “lyrical,” “exciting,” “daring,””warm” and “accessible,” with his delightful way of engaging the audience. Anyone who has attended a Warren Vaché-led performance has fond memories of both the music and the man.

One Reply to “warren vaché”