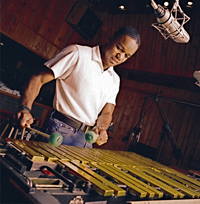 Vibraphonist-composer Stefon Harris, born in Albany, New York, in 1973, is heralded as “one of the most important young artists in Jazz” (The Los Angeles Times). He is unquestionably developing what will be a long and extraordinary career. Stefon’s passionate artistry, energetic stage presence and astonishing virtuosity have propelled him into the forefront of the current Jazz scene. Widely recognized and lauded by both his peers and Jazz critics alike, Stefon is committed to both exploring the rich potential of Jazz composition and blazing new trails on the vibraphone.

A graduate of The Manhattan School of Music, he received a B.A. in Classical Music and an M.A. in Jazz performance. Stefon is a recipient of the prestigious Martin E. Segal Award from Lincoln Center and has earned back to back to back Grammy nominations for Best Jazz Album including The Grand Unification Theory (2003), the 2001 release of Kindred (Blue Note) and his 1999 release of Black Action Figure (Blue Note) for Best Jazz Instrumental Solo. North Sea Jazz (Netherlands) named Harris for the prestigious International 2002 Bird Award for Artist Deserving Wider Recognition. He has been voted Best Mallet player by the Jazz Journalist Association (2003, 2002, 2001 and 2000), Debut Artist of the Year by Jazztimes, Downbeat’s Critics Poll Winner for Vibraphone and Rising Star, Vibraphone (2003) Newsweek’s Best Jazz CD, Best New Talent and 1999-2000 Readers Poll Best Vibraphonist by Jazziz Magazine and Chicago Tribune’s Debut of the Year.

Harris has performed at many of the world’s most distinguished concert halls, including Lincoln Center’s Alice Tully Hall. The Kennedy Center, San Francisco’s Herbst Theater, UCLA’s Royce Hall, Chicago’s Symphony Center, Detroit’s Orchestra Hall, and The Sydney Opera House. He has toured and recorded with the Chamber Music Society of Lincoln Center and performed his original compositions with the Dutch Metropole Orchestra in Den Hague. He has toured South Africa, Brazil and Europe performing at the North Sea Jazz Festival, Istanbul Jazz Festival and the Umbria Jazz Festival, among others. In 2001 he premiered The Grand Unification Theory, a full-length concert piece commissioned by The Troy Savings Bank Music Hall which was later presented at the New Jersey Performing Arts Center. He has also appeared at the legendary Playboy Jazz Festival, Montreal Jazz Festival and the Orange County Performing Arts Center. Most recently Stefon received a commission from The Wharton Center for Performing Arts, Michigan State University.

An active educator, Harris conducts over 100 clinics and lectures annually at schools and universities throughout the country. He is currently Artist in Residence at San Francisco Performances and in 2002 at The Isabelle Stewart Gardner Museum in Boston. In addition he has been an active member of the Executive Board of Directors for Chamber Music America

His premiere CD as a leader, A Cloud of Red Dust, was voted Best Debut Recording at the 1999 New York Jazz Awards. His 2001 CD Kindred earned him his second Grammy nod for Best Jazz Album: a quartet recording with noted pianist Jacky Terrasson, Kindred is a follow-up to his sophomore release Black Action Figure (Blue Note Records) which was also nominated for a Grammy for Best Jazz Instrumental Solo. The 2003 release of The Grand Unification Theory, an eleven movement piece featuring Latin, Classical, African and Jazz influences earned a Grammy nomination, JAZZIZ Critics Choice and 4 star reviews from Downbeat Magazine, Rolling Stone and The Los Angeles Times. Blackout, Stefon’s project featuring a hybrid of acoustic music and progressive sounds debuted its CD, Evolution, in April 2004. Praised for “pursing Jazz on its own terms” (Washington Post); the band features Casey Benjamin (alto sax), Marc Cary (keyboards), Darryl Hall (bass) and Terreon Gully (drums), and has performed to sold out crowds at The Kennedy Center and North Sea Jazz Festival. In African Tarantella, his 2006 Blue Note release, Stefon branches out into classic Jazz territory on this series of tributes to the legendary Duke Ellington.

In addition to leading his own band, Mr. Harris has recorded as part of The Classical Jazz Quartet, a series of Jazz interpreted classics with Kenny Barron, Ron Carter, and Lewis Nash. He has also recorded and toured with many of music’s greatest artists, including Joe Henderson, Wynton Marsalis, Cassandra Wilson, Buster Williams, Kenny Barron, Charlie Hunter, Kurt Elling, Cyrus Chestnut, Steve Coleman and Steve Turre among many others.

One Reply to “stefon harris”