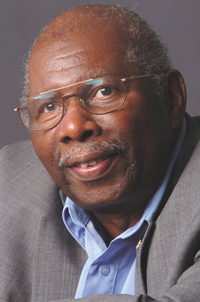 Pianist Oliver Jones is one of Canada’s finest musicians. His career also intertwines with the proud history of Jazz in his native Montreal, the thriving city that in its heyday also produced Oscar Peterson, Oliver’s lifelong friend and continuing inspiration. Oliver was born and raised in Saint Henri, a predominantly working class area of Montreal, several blocks from Peterson: young Oliver would sit on the Peterson porch, listening to the older boy practice. Oscar’s sister, Daisy Peterson Sweeney, became his first piano teacher, with lessons continuing for the next twelve years. These lessons solidified young Jones’ skills, which were already considerable. Oliver was performing publicly at age five, and he was nine by the time he had his first nightclub appearance.

Oliver Jones’ six-decade musical career has been rich and varied. His classical music education was followed by stints at Montreal’s Café St-Michel, enthralling patrons with his acrobatic piano stunts. From his teens to his early twenties, Jones could play anything from swing to rock-n-roll; in those days playing Jazz was not considered a viable career. This diverse training proved invaluable when, in 1964, the opportunity to become musical director and pianist for Jamaican singer Kenny Hamilton presented itself. Jones, with his wife and young son in tow, moved to Puerto Rico and continued with the Hamilton band for the next sixteen years. While popular music may have taken care of his practical needs, it did not satisfy his artistic cravings. While touring with Hamilton, Jones would take every opportunity to check out local Jazz clubs and to participate with other like-minded musicians.

In 1980, Oliver Jones returned to Montreal, determined to pursue Jazz professionally. He started by working regularly at Biddle’s, the now-closed downtown Jazz club run by bassist Charlie Biddle. He and Biddle recorded an album (Oliver Jones et Charlie Biddle) for Spectra Scène in 1982 and this, along with his regular playing at Biddle’s, caught the attention of record producer Jim West, who was launching the Jazz label Justin Time. West signed Jones, and the following year Justin Time issued Live at Biddle’s. In 1984 Jones recorded his first solo album, The Many Moods of Oliver Jones. He toured widely in Canada by 1985, appearing in concerts, festivals and clubs, either as a solo pianist or with a trio. In 1986 Jones toured in Australia, New Zealand, and Fiji, and made his first US appearances, including performances at the Newport (Saratoga Springs, NY) and Greenwich Village (New York) Jazz festivals. The first of many European tours followed in 1987 – his itinerary encompassed Britain, France, Spain, Ireland, Scotland, Portugal, Holland, Germany, and Switzerland by the decade’s end. Jones appeared in Cuba and Brazil in 1988, and in Africa in 1989 (Egypt, the Ivory Coast, Nigeria) and 1990 (Namibia). He performed at major Jazz festivals in The Hague, Holland (1987), Monterey, California (1988), and New York (JVC, 1989). Jones appeared with Symphony Nova Scotia (1987), the Orchestre Métropolitain (1988), and the Québec Symphony Orchestra, the Kitchener-Waterloo Symphony Orchestra, and the Montreal Symphony Orchestra (at the FIJM). A regular performer at the Festival International de Jazz de Montréal since 1981, Oliver was frequently asked to officially open the festival and has on more than one occasion been part of the closing gala. I think the exposure I had at the Montreal Jazz Festival was really the key to the world hearing Oliver Jones.

Throughout the 1990s, Oliver Jones played a busy concert and recording schedule, performing over 130 times a year and recording eight albums. In 1993, he recorded his second solo album, Just 88, which included his compositions Blues for Laurentian U and Dizzy-Nest, and earned him a Félix award. The following year he released From Lush to Lively, his first recording with big band. In 1997 he recorded another trio album, Have Fingers, Will Travel (with bassist Ray Brown and drummer Jeff Hamilton), before unexpectedly announcing his retirement in January 2000. By then, he was considered one of the best-known and most capable Canadian Jazz pianists in history.

But Jones’s retirement was only partial. In 2002 he became artistic director for the Jazz segment of the Montreal Chamber Music Festival. Two years later at Place des Arts during the FIJM, Jones played duets with Oscar Peterson publicly for the first time. In 2005 his album with singer Ranee Lee, Just You, Just Me, was released to critical and popular acclaim. That year Jones headlined at the Ottawa Chamber Music Festival and became artistic advisor to The House of Jazz (formerly Biddle’s) in Montreal. Perhaps alluding to his reemergence on the concert front and the recording studio, after his brief but much-publicized retirement, Oliver chose to name his 2006 CD release One More Time. It’s one of his best recordings to date, in a career filled with superlative achievements. Since then, Oliver has done several stellar appearances in Europe, including a co-billing with Diana Krall at Jazz in Marciac (France) in 2008 and is scheduled to appear in Spain, France and Switzerland in 2009.

Jones has won Juno (the Canadian Grammy) awards in 1986, 1990, and 2006, and Félix Awards in 1989 and 1994. The album Just You, Just Me also won “recording of the year”, and Jones “keyboardist of the year”, from the National Jazz Awards in 2006. He’s also the proud recipient of the Martin Luther King Jr. award, celebrating his contributions to the Black Community in Canada and in his native Montreal. In 1993 he received the Order of Québec, the province’s highest honor, and the next year he was awarded the Order of Canada, for “outstanding achievement in the arts.” 2005 saw Oliver being honored in Ottawa by Canada’s new Governor General Michaëlle Jean, as a recipient of the Governor General’s Performing Arts Awards for “lifetime artistic achievement”.