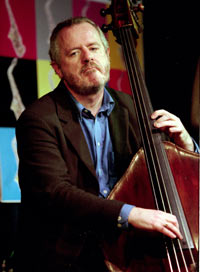 Niels-Henning Orsted Pedersen was born in Osted, Denmark, in 1946. He studied piano for six years, then switched to bass and studied with a leading classical teacher for five years. He was soon recognized as a great talent, starting his professional career at the age of fourteen, playing with some of the leading Jazz groups in Denmark.

In the early sixties his reputation spread all over the Continent, and soon he became one of the most in demand bassists in Europe. A†”regular” at the Montmartre Jazzhouse of Copenhagen, Niels-Henning had the opportunity to work with some of the visiting soloists, such as Bud Powell, Dexter Gordon, Ben Webster or Tete Montoliu. Later in that decade, he was invited to play at the very best of the European Jazz Festivals, appearing with such diverse artists as Sonny Rollins, Bill Evans, Albert Ayler or Teddy Wilson, which proved his versatility to adapt to any musical concept.

In the early seventies Niels-Henning started his long-lasting partnership with pianist Oscar Peterson, a musical experience that has been documented on many rightly acclaimed recordings. Around that time he also commenced a recording career as a soloist and bandleader, starting with the album “Jay walking”, which was nominated for the Montreux Grand Prix in 1975. Also from that time are his now classic recordings with Tete Montoliu and Tootie Heath.

During the eighties Niels-Henning shared his talents with those of Belgian guitarist Philip Catherine, teamed with American expatriate Kenny Drew in some celebrated duo and trio recordings, and toured with guitar virtuoso Joe Pass, while continuing his fruitful association with Oscar Peterson.

In the early nineties Niels-Henning remained closely associated to Kenny Drew in a series of recordings that became extremely popular in Japan as well as in other parts of the world. The Kenny Drew trio (featuring drummer Alvin Queen) became one of the most in demand Jazz Groups in Japan until Kenny’s untimely death in 1994.

Niels-Henning also started a trio under his own leadership, featuring Swedish guitarist Ulf Wakenius. The trio is documented on a series of recordings for the Verve label, featuring American Jazz talents such as Johnny Griffin or Phil Woods.

In the last years of his career, Niels-Henning toured Europe with a trio featuring pianist Mulgrew Miller and drummer Alvin Queen, while still being an essential part of the Oscar Peterson Trio.

Niels-Henning was a gentle, reserved, soft-spoken person; he was very loyal to his friends, open-minded and interested in everything happening around him: he could carry a conversation on politics, sports, and almost any subject, maintaining his opinions with strength, but without imposing on everybody else’s.

Niels-Henning Orsted Pedersen died at home in Copenhagen on April 19, 2005. We miss him.

One Reply to “niels henning Ø. pedersen”