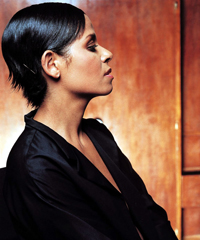 Born in Paris in 1968, of an Ivory Coast father and a Moroccan-Spanish mother, Laïka was raised mainly by women (her grandmother, mother, and aunt) in a Moroccan Jewish family. She leans towards her maternal Sephardic culture, open to different styles of music in the Mediterranean. She now lives and sings in Spain with her drummer-husband Daniel García-Bruno. It shouldn’t be surprising that Jazz –which finds its universality in the fact of being an adopted language and culture– should have constituted the natural horizon of her curious personality, willing to take a strong stand.

Her schooling (Ariam Ile de France, Cim, IACP) would not give a true picture of her singing: a personal expression founded on authentic living of Jazz. It’s not for nothing that she has a close rapport with the likes of Antonio Hart, Roy Hargrove, Ron Blake… that is, a school of musicians intent on a kind of mirror of the self : to be oneself by using a language established by great predecessors – who are not to be destroyed but respected and repaid with interest. Carmen McRae, Sarah Vaughan, Billie Holiday, Abbey Lincoln, or Diane Reeves are Laïka’s inspiration, not just models to adopt or discard on a whim. She also made herself known through Claude Bolling’s big band, where she worked closely with Jeffrey Smith.

Laïka has also taken to the stage in a different guise, that of theatre, and quite seriously: studies at the École du Théâtre de Chaillot with Aziz Kabouch, master classes with Irina Brook at the Cartoucherie, with Philippe Adrien and Dominique Boissel, and Jack Garfein of the Actors’ Studio. Her participation in the musical comedy A Drum is a Woman, by Orson Welles and Duke Ellington, with Bolling and Jérôme Savary (Palais de Chaillot, 1996) was quite appropiately a synthesis of music and theater. From then on she has lead a double career as musician/actress: Eva Kaczor’s Oli-Ola, 1999; Jean-Luc Jeener’s Peau d’Ane, at the Théatre du Nord Ouest, 1999/2000; Xavier Lacouture’s Variations sur un Thème, role of little prince, staging by the author, 2000; Antoine Campo’s L’Indien en Smoking, music by Villa-Lobos, staging by the author at the Conservatoire de Montreuil, 2000; Los Sobrinos del Capitán Grant, adapted from Jules Verne, staging by Paco Mir at the Zarzuela Theater, Madrid, 2001/2002/2003/2004. She has also played in Claude Lelouch’s film Hasards ou Coïncidences.

Yet it is as vocalist and leader of her quintet that her full personal expression soars and affirms itself. After her work with Sixun, David El-Malek, or Julian Lourau, now it’s her own stuff she puts forth, an album she had in her for a long time. Look at me now! was forced by artistic necessity, that which urges her to write numerous texts on things usually not sung about. Her repertoire includes unusual music by Wayne Shorter and Joe Henderson, and contemporary composers such as Nicholas Payton.
It is thanks to a family of musicians that her music takes shape. The talented tenor-sax voice of Parisian-Israeli David El-Malek is especially noteworthy, adding a colorful presence to Laïka’s uncompromising vocal lines.

When fashion dictates turning our backs on Jazz classics, Laïka would rather make them her own, adding her singular touch: the well-trodden songs she interprets are completely made anew.