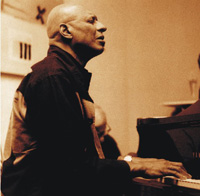 Born in 1937 in Detroit, Michigan, USA, Lightsey is a gifted modern Jazz pianist who has not yet received the attention his talents deserve, despite a career that has included sessions with some of America’s finest modern Jazz instrumentalists, and a series of enjoyable recordings under his own name.

He began working in Jazz in the mid-50s, largely accompanying vocalists, first in New York and then, in the early 60s, on the west coast. He recorded with the great bebop saxophonist Sonny Stitt in 1965, and began an association with the subtle west coast singer/trumpeter Chet Baker, that resulted in five fine album recordings. At the beginning of the 80s, his career received a boost when he joined the popular saxophonist Dexter Gordon’s band for four years.

One Reply to “kirk lightsey”