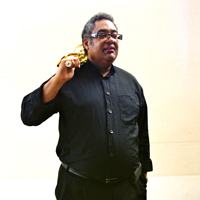 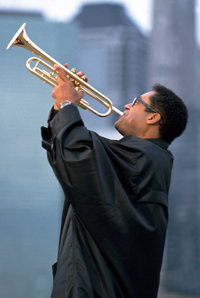 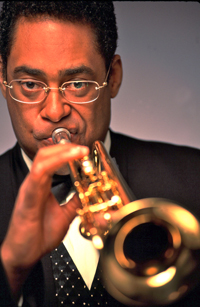 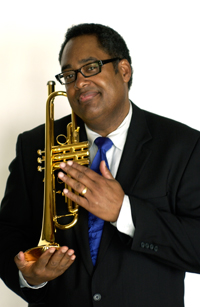 BIO
____
If any player who is active today can be said to exemplify the continuum of Jazz, from its roots to what the new cats on the block are blowing in the 1990’s, it is certainly Jon Faddis. Born in Oakland, California, on July 24, 1953, Jon began playing trumpet at age eight, inspired by an appearance of Louis Armstrong on The Ed Sullivan Show. Three years later, his trumpet teacher Bill Catalano, an alumnus of the Stan Kenton band, turned the Jazz-struck youngster on to Dizzy Gillespie. By his mid-teens, Jon had not only met Dizzy, but he had even sat in with his hero’s combo at the famed Jazz Workshop in San Francisco.

During high school in Oakland, Jon played with local R & B combos and big bands. Soon after graduating from high school in 1971, he joined Lionel Hampton’s band as featured soloist, touring widely and appearing on a Canadian television special, “One Night Stand”, in the company of Roy Eldridge, Gene Krupa, Buddy Rich, Mel Tormé and other Jazz greats. That same year, responding to an invitation from Mel Lewis to drop by the Village Vanguard whenever he got to New York, Jon sat in with the That Jones -Mel Lewis Big Band on one of their regular Monday night sessions. That sit in turned into four years of Monday nights playing with the band, as well as a tour of the Soviet Union with the highly acclaimed unit. During this period, Jon studied at the Manhattan School of Music, worked with Gil Evans, toured with Charles Mingus’ small group and recorded on the Pablo Label with Dizzy and Oscar Peterson.

Other highlights included filling in (at the tender age of 18) for an ailing Roy Eldridge in an all-star concert led by Mingus at New York’s Philharmonic Hall, a Carnegie Hall gig with Sarah Vaughan, two years in attendance at Dick Gibson’s Annual Colorado Jazz Party (including a memorable duet with Eubie Blake), appearances with Gil Evan’s, Count Basie’s and Benny Carter’s big bands, and appearances at Radio City Music Hall with Freddie Hubbard, Art Blakey, Tony Williams, Herbie Hancock, and at festivals in the US and abroad.

From 1975 to 1982, Jon became one of the most in demand session musicians in New York: those studio years ultimately proved significant in his artistic development. Exposure to a diverse spectrum of music helped shape him into the broad-based interpreter and creator in African-American musical idioms that he is today. Jon’s distinctive trumpet voice would be heard on albums by performers as disparate as Duke Ellington, The Rolling Stones, Frank Sinatra, Aretha Franklin, Paul Simon, Kool and the Gang, Luther Vandross, Quincy Jones, Billy Joel and Stanley Clarke, to name a few. His horn would be featured on the theme of The Bill Cosby Show, on the soundtrack of Clint Eastwood’s films The Gauntlet and Bird , and on many a commercial jingle.

Although Jon had toured Europe with Dizzy Gillespie in 1977, performing and recording with him at the Montreux Jazz Festival, a turning point was the invitation from Dizzy to accompany him on a visit to the White House in 1982. The occasion was part of a PBS series In performance at the White House in which Dizzy and several other major American artists showcased young colleagues they believed to be “on the verge of exceptional careers”. In within a year, Jon had formed his own group, including saxophonist Greg Osby and pianist James Williams, which debuted at the Village Vanguard in October 1983. The following year he recorded in a quintet led by McCoy Tyner and Jackie McLean, and in 1986 toured and recorded with Clark Terry. In 1987, Jon played the major role in organizing and rehearsing Dizzy’s big band, the one that would celebrate the legendary bebopper’s 70th birthday on tour of the US and abroad. Jon was a featured soloist and later assumed the same position as musical director of Dizzy’s United Nation Orchestra, another international touring all-star group formed in 1989.

In December 1991 Jon Faddis was appointed musical director of the Carnegie Hall Jazz Band, an 18 piece all-star orchestra which serves as a vehicle for some of the greatest names in Jazz to present concerts that are not part of their regular repertoire. The band made its debut in October, 1992, and released its first album on the Blue Note label in 1995. During the late nineties, Faddis has been touring with the Jimmy Heath-Slide Hampton-Jon Faddis sextet. He has also played an important role in the development of the Trumpet Summit Band, which has featured a who is who of the current trumpet scene, from Clark Terry and Benny Bailey to Roy Hargrove, Terell Stafford and Nicholas Payton.

As a composer, Faddis recently completed a collaboration with writer-director-librettist Lee Breuer on a new Jazz Opera titled Lulu Noire. Adapted from the Wedekin Lulu plays, the piece, written for 6 voices and ten musicians, updates the setting from turn-of-the-century Berlin to the world of New York’s Jazz Clubs. The work premiered at the Spoletto Festival and at the American Music Theater Festival in Philadelphia in 1997.

Faddis is a past winner of Down Beat magazine’s Talent Deserving Wider Recognition award on the trumpet category. He is also a five-time winner of the MVP/Trumpet award from the New York Chapter of the National Academy of Recording Arts and Sciences. Jon has an enduring commitment to the education of young musicians, and frequently conducts clinics and master classes, devoting personalized attention to teaching the next generation of jazz musicians. The Jon Faddis Award for Musical Excellence is presented each year is presented every year to the most promising Jazz trumpet player in the New York area. In addition, Jon is the first artist-in-residence at the Conservatory of Music of the Purchase State University of New York, and also serves on the institution’s faculty.

One Reply to “jon faddis”