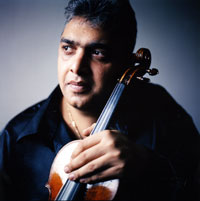 “In him, French jazz has finally found a successor to Grappelli”
Jazz Hot

Florin Niculescu is one of the finest violinists on the international jazz scene today. Through many musical collaborations this captivating musician has developed a distinct sound and language, building on a solid classical education and linking gypsy traditions to diverse forms of jazz. His impeccable technique and outstanding virtuosity – praised by fellow musicians and audiences alike – are not a means to an end but a way of expressing his artistic personality. And rather than creating boundaries, his obvious spiritual affinity with Stephane Grappelli (1908-1997) has enabled him to explore new and innovative musical grounds. Following a long and fruitful association with Biréli Lagrène, Florin Niculescu is now involved in a new project, reworking some of Django Reinhardt’s (1910-1953) material. Still unreleased, “Djangology” is a truly original undertaking, bringing together a traditional acoustic manouche jazz band and a quartet of classical musicians, alternatively playing written arrangements and improvised parts. Florin Niculescu was born in Bucharest on 8 February 1967, into a settled gypsy family, all professional musicians; his father, violinist Corneliu Niculescu, spent ten years as the main collaborator of pan flautist Gheorghe Zemphir. His mother was a pianist, his sister played the cello, and his uncle was first violin in the Bucharest opera orchestra. Growing up in such a family meant his entire childhood and teenage years were solely devoted to music, particularly the violin. “My father was my first violin teacher. We started to work seriously when I was four or five years old. Thanks to him I acquired a strong base, which proved really useful during my training and my musical career. Unfortunately, his professional duties led him around the world. He was often absent from home, so my mother took over and continued my musical education.” At the age of six Florin entered the George Enescu Academy of Music in Bucharest to consolidate his home training. “ I was lucky enough to have a great teacher who had previously taught many Romanian soloists and who really valued the fact that I had a solid musical base right from the start”. During his studies, Florin performed works from the violin repertory, first as a member of the school orchestra, then in chamber music orchestras and finally as a soloist. He was awarded first prize from the Academy and in 1984 received a special mention from the jury at the Henry Wieniawski International competition in Lubjana. He also played alongside his father at weddings and celebrations, a demanding yet useful experience, which added extra strings to his bow and developed his sense of improvisation. In the early 90s, aged 23, Florin left Romania for France and moved to Paris. In 1991 he met guitarist Boulou Ferre and his brother Elios, which marked the first of many collaborations. Four years later he joined guitarist Romane’s quintet. He left to form his own band with bass player Jacques Vidal, pianist Michel Graillier, guitarist Frederic Sylvestre and drummer Simon Goubert. In 1995, he joined the ‘New Quintette du Hot Club de France’ lead by Babik Reinhardt (1944-2001), son of Django and participated on their eponymous album. In 1998 he recorded with Christian Escoude ‘A Suite For Gypsies’ and in 1999 ‘For Your Friends’ with Marcel Azzola. The 1999 recording of ‘L’Esprit Roumain “Florilege” reunited father and son, surrounded by Jani Lincan (cymballum), Angelo Debarre (guitar), Antonio Licusati and Costel (bass) and Ionoutz (accordeon). The same year, accompanied by organist Emmanuel Bex and Simon Goubert, he recorded “Gypsy Ballads” nominated ‘Album of the Year’ and was awarded the ‘Talent Jazz’ prize at the Midem in 2001. The end of 2000 found Florin Niculescu in New York, sharing the bill with Biréli Lagrène, Babik Reinhardt, Jimmy Rosenberg and Bucky Pizzarelli at the first Django Reinhardt festival. The concert was recorded live and the album “ Django Reinhardt NY Festival – live at Birdland” was released. This event was even more memorable because of his meeting with George Benson who was very impressed by the violinist and showered him with praise. In 2001 Florin toured various European festivals as part of a trio. He performed with Emmanuel Bex and Francois Lezeau at the Vienna Jazz festival and with Emmanuel Bex and Simon Goubert at the Marciac Jazz festival, opening for pianist Keith Jarrett. In Oslo he associated himself with Danish bass player Niels Henning Ørsted Pedersen and Belgian guitarist Philip Catherine. That same year, Biréli Lagrène invited him to join his new quintet, The Gipsy Project, inspired by the ‘Quintette du Hot Club de France’ founded by Django Reinhardt and Stephane Grapelli. Florin took on the role of the late violin master in the band’s line-up. Their first eponymous recording, with superb interplay between Lagrene and Niculescu, received the ‘Prix du Public” at the Djangos d’or in 2002. Their follow up album “Gipsy Project and Friends’, featuring reworked versions of the late musicians legacy, was released in 2002. Soon after, the quintet embarked on a long tour, appearing at prestigious international festivals such as Montreux, Antibes/Juan-les Pins, Marciac and Vienna. A DVD – “Biréli Lagrène Gipsy Project and Friends Live at the Vienna Jazz Festival” – is now available. Florin Niculescu was outstanding in the band and his ability to interact with Biréli Lagrène exceptional. Inspired by the sound of the ‘ Quintette du Hot Club de France’ but not imitating it, the Gypsy Project was a splendid showcase for manouche jazz, keeping its spirit alive. Being constantly exposed to a large public, the music has now emerged from the shadows and enjoys the recognition it deserved. In the midst of all these intense activities and collaborations, Florin who is always in great demand, has been associated and recorded with France’s most popular artists such as Françoise Hardy, Charles Aznavour and Henri Salvador amongst a host of others.