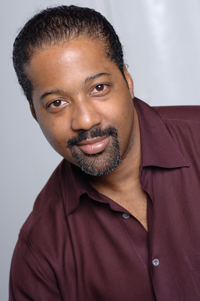 BIO
—-
When you think of hard-driving swing, daring expression, sophistication and elegance in artistry, formidable technique and a thunderous sound, there are only a small handful of young pianists you think of and one of them is most assuredly ERIC REED. But don’t think of him as a just a pianist; Eric is one of the new generation’s most advanced thinkers in Jazz music. Born in Philadelphia, PA on June 21, 1970, Eric grew up playing Gospel music in his father’s storefront Baptist church, starting at the age of five. “My father was a minister but he also used to sing with a Gospel group in Philly called “The Bay State Singers”. He was my earliest musical influence. I also was hit heavily by Edwin Hawkins’ music of the 1970s. Gospel music remains a large part of my playing today.” Afterwards, young Reed was bitten by the Jazz bug after hearing recordings of Art Blakey, Ramsey Lewis and Dave Brubeck.

A child prodigy, Eric started playing piano at age two and formal instruction began at age seven at Philadelphia’s Settlement Music School. However, he remained primarily self-taught, often confounding his instructors by not learning the written music, but listening to them play it first and memorizing musical pieces note-for-note. “I wasn’t interested in Bach at the time; I was checking out Horace Silver.” By age eleven, his family moved to Los Angeles and he continued his formal instruction at the R.D. Colburn School of Arts where his theory teacher Jeff Lavner, finally realizing that Eric was simply not going to bear the classics, turned him onto recordings of great Jazz pianists. Clearly, Eric was setting out to carve his own path early. “My neighborhood library had all kinds of hip Jazz records and I was in there everyday checking them out. Everything was there: Ahmad Jamal, Erroll Garner, Oscar Peterson, McCoy Tyner — it was unbelievable! By the time I was thirteen, I didn’t realize it but, I had digested all of the Jazz recordings that musicians were expected to know.”

After four years of intense self-teaching combined with mentoring by composer Harold Battiste, Eric could be heard around town working leading his own groups and working in the bands of Teddy Edwards, Gerald Wilson and John Clayton. He attended Cal State Northridge for one year during which he toured briefly with Wynton Marsalis at age 18. A year later (1990), Eric joined Marsalis’ Septet. He spent two years with the Lincoln Center Jazz Orchestra (1996-98), making countless recordings and TV appearances with them. Reed also worked in the bands of Freddie Hubbard and Joe Henderson (1991-92). Eric continued to perform and record with an assorted multitude of masters like Elvin Jones, Benny Carter, Wayne Shorter, Ron Carter, Cassandra Wilson, Jimmy Heath, Clark Terry, Dianne Reeves and a host of other diverse performers including Natalie Cole, Patti Labelle, Oleta Adams, Edwin Hawkins, Jessie Norman and Quincy Jones. Since 1995, Eric has been touring the world with his own ensembles, making serious waves in the Jazz community. The legendary Ahmad Jamal has called Eric “one of my very favorite pianists.”

Eric’s recording Pure Imagination, shot to #1 on the Gavin chart and stayed there for seven weeks, earning him the 1999 Gavin Artist of the Year award. His next recording, Manhattan Melodies was also #1 on Gavin for several weeks. Later issues include From My Heart, his first ever recording of all ballads; We, a much celebrated duo recording with trombonist Wycliffe Gordon; Mercy and Grace, a compilation of spirituals, hymns and gospel songs, and Merry Magic, a selection of Christmas songs. His latest recordings include Stand (2009), Plenty Swing, Plenty Soul (2009), (with Cyrus Chestnut), Dancing Monk (2011), Something Beautiful (2011) and The Baddest Monk (2013).

A masterful composer/arranger, Reed has scored music for independent films as well as mainstream, including the comedy “Life“, featuring Eddie Murphy and Martin Lawrence.

In addition to leading a quintet that features some of the newest young talent on the scene, Eric presently expands his musical horizons in the area of education, teaching in various situations worldwide. Away from the piano, Eric serves as the artistic director of a concert series called Jazz Composer Portraits at Columbia University’s Miller Theater.

One Reply to “eric reed”