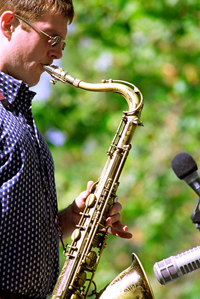 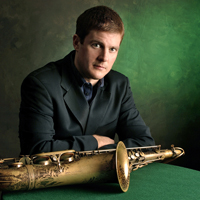 BIO
____
Eric graduated from the William Patterson College in New Jersey -where he studied with Harold Mabern, Rufus Reid and Joe Lovano- in 1990, and moved to Chicago, where he soon made his mark on the scene, ultimately catching the attention of organist Charles Earland. Their musical relationship is documented on numerous recordings.In 1991 Eric placed second in the prestigious Thelonious Monk international Saxophone Competition, vaulting himself into Jazz’s Young Lions category.

In 1992 Eric moved to New York, where he has been a regular performer at The Blue Note, The Village Vanguard, Sweet Basil’s, Small’s and The Iridium, with such names as Cecil Payne, Charles Davis, Rufus Reid, Harold Mabern, Eddie Henderson, Larry Willis, Kenny Barron, Freddie Cole, Pat Martino, Cedar Walton and Charles Earland.

In the spring of 1992 Eric recorded his first album as a leader, Straight up, on the Delmark label. He has followed that debut with an impressive string of leader (4 for Criss Cross, 1 for Highnote, 3 for Delmark and 1 for Milestone) and sideman recordings that make him one of the most often heard artists on FM radio in the New York area.

Eric has also recorded Stone Blue for Blue Note Records with legendary guitarist Pat Martino , and has co-founded the new sextet One for All , whose first release, Too soon too well was very well received, and voted one of 1997 top five albums by Jazz Times magazine. Eric’s two releases on the Japanese Alfa Records Man with a horn and Heavy hitters were both commercially successful and critically acclaimed.

One of the most talented emerging new voices on tenor saxophone, Eric Alexander has performed throughout the United States, Europe, Japan and South America.

One Reply to “eric alexander”