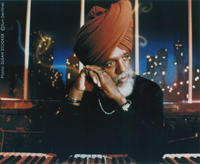 Dr. Lonnie Smith is an authentic Master of the Hammond B3 organ. For over five decades he has furthered the sound of Jazz Organ, created a worldwide fan-base, and revealed his musical talents on over seventy albums. Today, his name is truly synonymous with the instrument.

Jazz Times magazine recently described him as “a riddle wrapped in an enigma wrapped in a turban!” This kind of description suggests the level of complexity that he exhibits in his music and the pure amazement that it elicits. Much has been written about his music…but just who is Dr. Lonnie Smith?

Lonnie Smith has consistently been a leading force in jazz since 1969 when critics for Downbeat magazine hailed him as ‘Top Organist of 1969.’ More recently he has been selected as ‘Organ Keyboardist of the Year’ by The Jazz Journalist Association in 2003, 2004 and 2005. Born in Buffalo, New York, Lonnie was blessed with the gift of music and gained an exposure to gospel, blues and jazz through his mother at an early age. In his teens, he went on to sing in several vocal groups including his own, “The Supremes,” formed long before Diana Ross used the name.

Lonnie also played the trumpet at school, and was a featured soloist, but upon possessing his own organ he immediately immersed himself in studying it with no instruction other than Jimmy Smith and Bill Doggett records and paying rapt attention to the church organ. Within months his proficiency attracted the attention of local musicians and so began his ascent into jazz history.

In the late 1950s Lonnie at last discovered the instrument he calls the “425 pound beast”—the Hammond B-3 organ. His first organ was given to him after he told local music store owner Art Kubera he was certain he could make a living if he only had an instrument to play. The next time he came by the shop, Kubera locked the door and led Lonnie to a massive Hammond B3 and announced that it was his—if he could move it out of the store! Lonnie lost no time in taking him up on his offer and thanks to this kindness and generosity so began Lonnie’s destiny. Dr. Smith often refers to Art as his “Angel.”

Reflecting back on that time, Lonnie explains, “Even though I didn’t know how, I was able to play right from the beginning. I learned how to work the stops and that was it. It’s a passion for me, so everything else came naturally. It is a difficult instrument to play though, because you have two keyboards and the bass pedal, so you are the orchestra. You have so much to do but you don’t want to get in anybody’s way. Just because you have muscle doesn’t mean you have to show it off.”

Lonnie first gigs were played at Buffalo’s hottest club, The Pine Grill where he quickly came to the attention of musicians Jack McDuff, Lou Donaldson, George Benson and the agent Jimmy Boyd—who signed Smith to record with Grant Green. Soon after he moved to NYC and began playing regularly in George Benson’s Quartet. His reputation as a self-schooled innovator grew rapidly during his tenure with Benson, and eventually Smith went on to make his first recording as a leader on Columbia Records. After performing with Lou Donaldson and recording the seminal jazz gem “Alligator Boogaloo,” Smith was signed to Blue Note Records.

During the past decade there has been a resurgence of interest in the Hammond B3 and Dr. Smith has been amused to find himself sampled in rap, dance and house grooves while being credited as a forefather of Acid Jazz. His recent critically acclaimed recording of pop star Beck’s tunes, including “Loser,” has secured his relevance with yet another generation of music fans. When questioned about his consistent interest in music some consider outside the jazz mainstream, Lonnie says, “Jazz is American Classical, and this music is a reflection of what’s happening at the time.”

His inspired interpretation of an eclectic sampling of musical types explains in part his broad appeal and why he has been in constant demand from his earliest gigs to his most recent club appearances. Revered throughout the world and popular among many disparate groups, his unique stylings and prolific output have elevated him to the status of living musical icon.

Lonnie’s irrepressible energy infuses his music and audience with the joy that he has always found in creating and performing. “The organ is like sunlight, rain and thunder—it’s all the worldly sounds to me!”