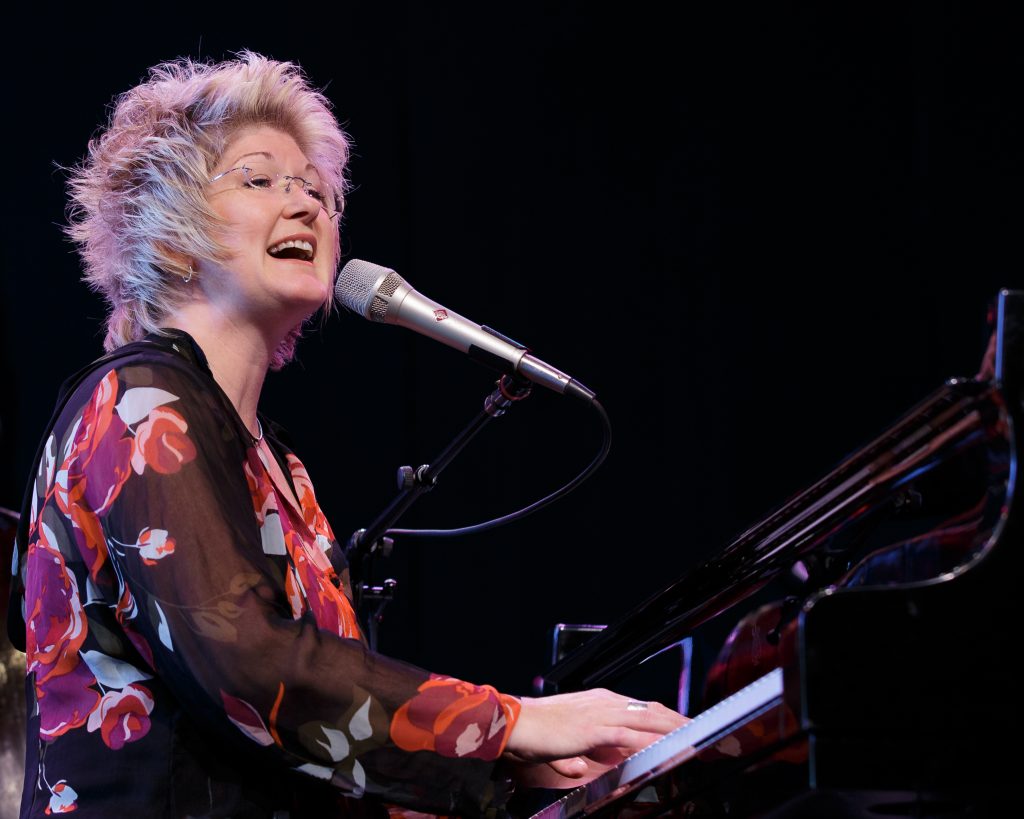 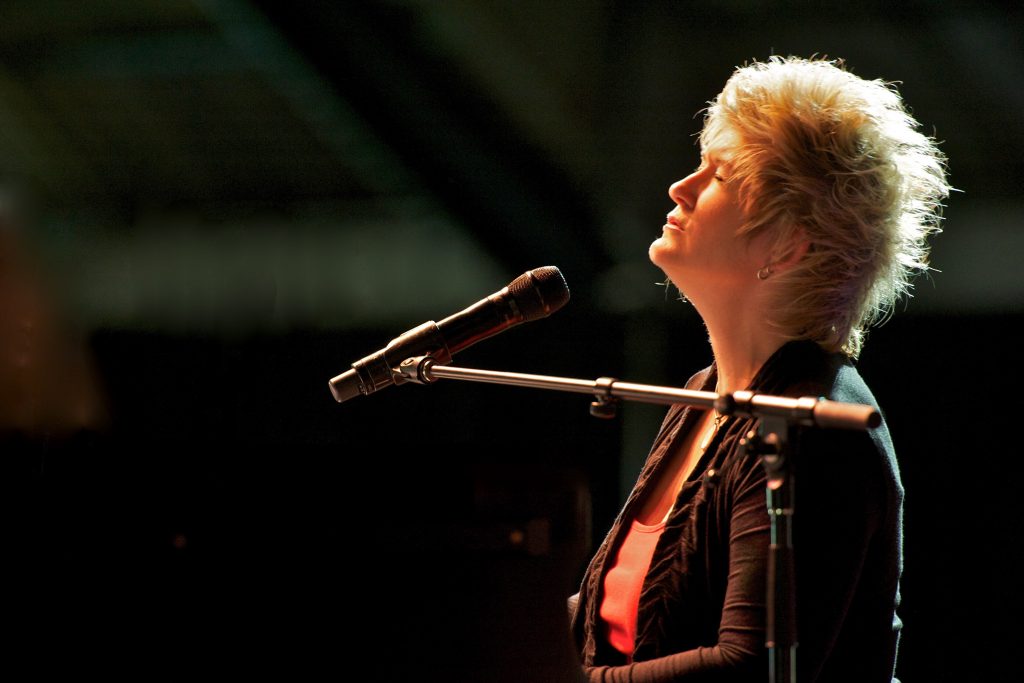 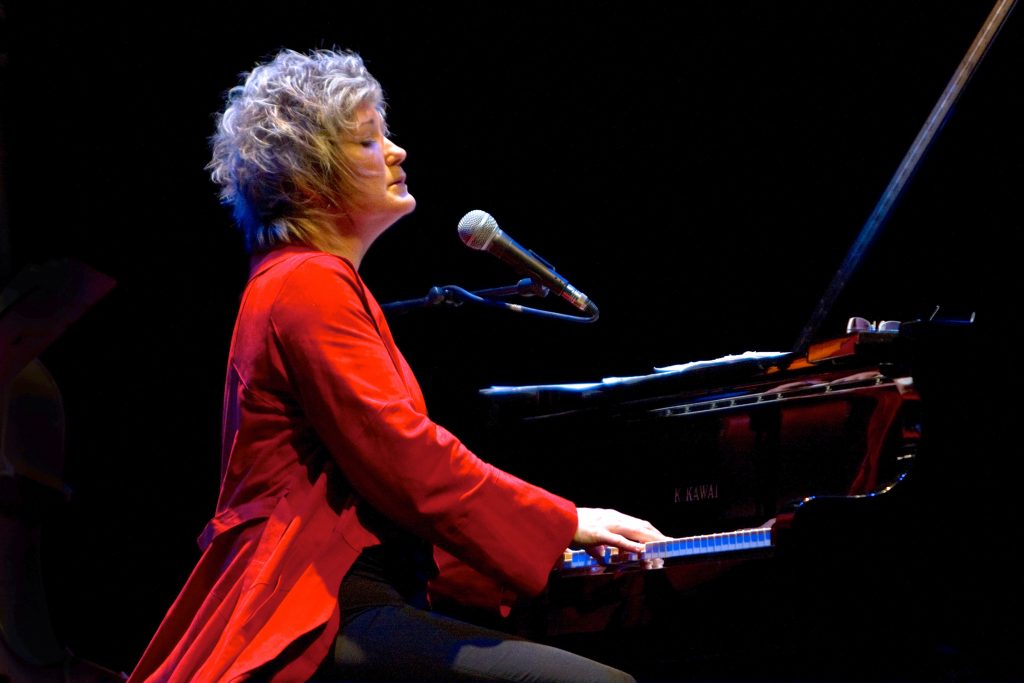 It’s no small accomplishment to be thought of as “The most creative and compelling singer-pianist since Shirley Horn”, but that’s exactly how Joel Siegel of the Washington City Paper described Dena DeRose. If she comes to your city and you want to catch the show, go early, because the room is going to be packed. She not only awes her audiences and music critics with her facility on the piano and her swinging, soothing vocal style but, as Richard Scheinin (San Jose Mercury) aptly put it, “… she exudes joy… what soul!”

As a recording artist, DeRose has 12 CDs as a leader to her credit, all of which have received superior accolades. Her newest, and second, HighNote release ‘United’ features the incomparable rhythm section of 17+ years – Martin Wind and Matt Wilson – with guests Ingrid Jensen on trumpet and Peter Bernstein on guitar. This CD hit the streets February 2016 and had stayed on the radio playlists reporting to Jazz-Week.com for 8 months, has been featured on many radio stations in Europe, and has garnered many excellent reviews by Downbeat, JazzTimes, JazzHistoryOnline, All About Jazz, The New York Record, and many other international jazz publications.

All of DeRose’s recordings from Sharp Nine, Maxjazz, and HighNote, have all received 4 stars from Downbeat, she has continued to gain listeners around the globe, and has had numerous Grammy considerations. Dena’s recent CD that held Grammy considerations was her HighNote recording “We Won’t Forget You… An Homage To Shirley Horn” featuring Martin Wind and Matt Wilson with special guests Eric Alexander, Jeremy Pelt, and Gary Smulyan.
Astoundingly, Dena has also found time to hone her skills as a Jazz educator, and in the past was on the adjunct faculty at some the most prestigious jazz institutes, including Manhattan School of Music, NYU, The New School, Long Island University, Purchase College in New York, The Hartt School of Music in Connecticut, and was on the faculty for 10 years at “New York Comes To Groningen” Prince Claus Conservatoire of Music in Holland. Ms. DeRose is currently tenured as the Professor of Jazz Voice at the Jazz Institute of The University of Music and Performing Arts in Graz, Austria. She frequently leads clinics and workshops at such prestigious schools and festivals such as the Stanford Jazz Workshop, Centrum-Port Townsend Jazz, the Dave Brubeck Institute in Oakland, CA, The Jazz School in Berkeley, CA, the JEN, Taller de Musics in Barcelona-Spain, NJPAC Jazz for Teen Program, The Litchfield Summer Jazz Camp, the Rotterdam Summer Jazz School, and The Royal Conservatory of Music in Den Haag, among others. She has served as a first round judge at the Thelonious Monk Vocal Competition and served 6 years on the NJ Star Ledger Scholarship Awards committee.

Christopher Louden of JazzTimes writes “…becalmed majesty escalating to vibrant exaltation…”, and Chris Hovan of All About Jazz writes “Over the course of the dozen albums she has recorded since landing in New York in 1991, DeRose has consistently proven herself as a singular pianist and vocalist with a depth of scope that is really something to hear.” The New York City Record’s Ken Dryden review of ‘United’ wrote “Dena DeRose has grown into one of the most acclaimed pianist/vocalists in jazz during her two decades-plus as a professional.”