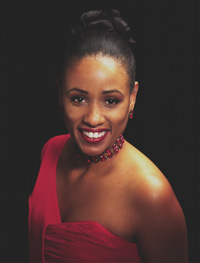 Taste and understatement. Swing and savoir faire. Grace and grooves. Intimacy and feeling. Singer Charmin Michelle delivers all of the above and more.

Ms. Michelle’s savvy art is both fresh and timeless. Her conversational style recalls such earlier greats as Billie Holiday and Nancy Wilson, yet it’s free of any tiresome camp or easy nostalgia. Charmin Michelle truly understands, feels and puts her imprint on small group swing singing. Born in Birmingham, Alabama, Charmin moved to chilly Minnesota while still a small child. She’s called the land of Prince and Bob Dylan home ever since, though the singer is no stranger to the pleasures and pitfalls of the road. Charmin’s had both fun and hair-raising experiences entertaining U. S. Troops around the globe, and has recorded with funkateer Jesse Johnson’s Revue and his popular spin-off group, Ta Mara and The Seen.

During her first tour to Europe she was as a featured guest with internationally known pianists Mulgrew Miller and Kirk Lightsey the summer of 1997. That tour was set up at the beset of Hammond B-3 organ legend the late Brother Jack McDuff, who was one of the singer’s biggest fans. “She’s really different. I call her Chow Mein” McDuff laughs. “With her trio, less is more. And they’re right in the pocket.”

Since 1998 she has performed in jazz festivals thoughout Spain, Portugal and France with the Tuxedo Big Band (who hail from Toulouse, France) pianist Ignasi Terrazza and big band leader Oriol Bordas (both of Barcelona, Spain). Less is more could be Charmin Michelle’s motto. Her club and concert sets are always cool, calm and collected. Even when she’s moonlighting in the blues world fronting the jump band, The Senders, she never shouts or strains. “I’ve always admired singers who can belt out tunes, but I know I’m not a belter.” Michelle told the Minneapolis Star-Tribune. “So I try to use dynamics and emotion to get my point across. And I choose tunes where the lyric and melody has a lot of meaning. That way I can express a lot of feeling without having to shout it out.”

Michelle makes her point more subtly, both as an interpreter of seldom-heard gems from the Great American Songbook, and as a songwriter. On her critically-acclaimed debut disc “Your Eyes” (currently out of print), Charmin revives such underexposed Billie Holiday numbers as the breezy, Sailboat in the Moonlight”, the haunting “Ghost of Yesterday”, and the blues-rockin’ “Now or Never”. She also ably tackles, “You’re My Thrill”, Mack Gordon’s obscure “Me, Myself and I”. In September of ’98, she released her second CD entitled “Destination Moon”.

One Reply to “charmin michelle”