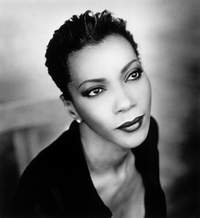 Carmen Lundy is a native of Miami, Florida. At the age of six, Ms. Lundy began piano lessons. She was deeply inspired by her mother, who was the lead singer in a gospel group known as The Apostolic Singers, and joined her church junior choir. Ms. Lundy began her professional career performing at the local high school proms as part of a vocal duo “Steph and Tret.” She made her first recording “The Price Of Silence” while still in her teens. Ms. Lundy attended The University Of Miami as an Opera major, but discovered that Jazz was where her talent really shined. She later graduated with a BM Degree in Studio Music and Jazz … one of the first singers to do so. After working the local jazz club scene in Miami and traveling to Europe and North Africa with the U of M Big Band in 1977, Ms. Lundy moved to New York City in the spring of ’78. She immediately began working the Jazz scene throughout the Tri-State area and from Harlem to Greenwich Village, impressing the particularly critical jazz audience.

Ms. Lundy has performed and recorded as a soloist with the Akron Symphony Orchestra and The Vallejo Symphony Orchestra in a piece written for her by the great pianist and composer Billy Childs (The Distant Land). Ms. Lundy’s performance history also covers a range from Big Bands to Choral Works to Duos. Ms. Lundy has traveled throughout Europe, The United Kingdom and Japan, performing in countless concerts, Jazz Festivals, recording dates and club dates. She has also performed or recorded with such jazz veterans as Walter Bishop Jr. , Ray Barretto, Don Pullen, Kenny Barron, John Hicks, Earnie Watts, Mulgrew Miller, Billy Childs,Teri Lynn Carrington, Kip Hanrahan, Courtney Pine, Marian McPartland, Kenny Kirkland among many others.

Ms. Lundy’s work has been critically acclaimed by The New York Times, The Village Voice, The Los Angeles Times, The Washington Post, as well as numerous foreign publications.

Ms. Lundy is also a composer and songwriter, publishing over twenty songs. Her tunes have been recorded by such artists as Kenny Barron (“Quiet Times”), Earnie Watts (“At The End Of My Rope”), and Straight Ahead (“Never Gonna Let You Go”), as well as on her own CD’s which includes Old Devil Moon (JVC), Self Portrait (JVC), Moment To Moment (Arabesque), Night And Day (CBS/SONY), and Good Morning Kiss (CLR). Ms. Lundy’s own record label is CLR, and she has recently re-issued her debut album “Good Morning Kiss” as a special limited edition release (check it out on the Discography page).

Ms. Lundy has acted in the theatre as well. She performed the lead role as Billie Holiday in the Off-Off Broadway play “They Were All Gardenias” by Lawrence Holder, and the lead in The Broadway show, Duke Ellington’s Sophisticated Ladies” (European Tour). Ms. Lundy made her television debut as the star of the CBS Pilot-Special “Shangri-La Plaza” in the role of Geneva, and subsequently moved to Los Angeles where she currently resides.

Ms. Lundy has also given Master Classes in Australia, Denmark, Japan, Switzerland, New York, Northern,California, and Los Angeles. She has recently participated in Betty Carter’s Jazz Ahead Program at The Kennedy Center in Wash., D.C.as guest artist and clinician, working alongside her brother, bassist Curtis Lundy. She has worked with The Theloneous Monk Institute of Jazz as guest artist and clinician, and she is an active board member of YES Inc. (Young Educated Singers Inc. )

Carmen Lundy is also a painter in oils on canvas and her works have been exhibited in New York at The Jazz Gallery in Soho and at The Jazz Bakery in Los Angeles.

One Reply to “carmen lundy”