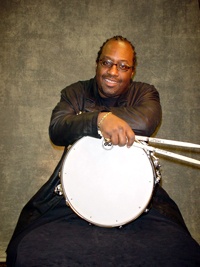 The pursuit of knowledge, experience, and ever-present swing is a recurring theme in the life of drummer/composer and Milwaukee native Carl Allen. It’s a theme that began to take shape when, as a teenager, he performed with such greats as Sonny Stitt and James Moody and it’s a theme to which he held fast as his musical quest took him to The University of Wisconsin – Green Bay (1979-81) and New Jersey’s William Patterson College (1981-83). While at William Patterson, he pursued his life-long dream, the drum chair in trumpeter Freddie Hubbard’s band. He got the position in 1982 and remained with Hubbard for eight years – also serving as the trumpeter’s musical director and road manager.

Allen says, “my ultimate goal is to get to a level like Art Blakey, Art Taylor, Elvin Jones and Billy Higgins and these cats who, every time they sit down behind a set of drums it’s swinging. The power of swing is something else and once I get to that level everything else falls into place.”

In a true Messenger (as in Art Blakey) state of mind, Allen began to extend Blakey’s ideals into his efforts outside of Hubbard’s band. In 1988, Allen co-founded Big Apple Productions (with altoist Vincent Herring), which through its production of several albums for labels in Japan (Alfa, King, Venus, Keystone Music International and others), introduced now rising stars like Roy Hargrove, Nicholas Payton and Cyrus Chestnut.

Allen maintains an exhaustive schedule of recording and touring. He remains active as a leader (most recently leading his New York All-Star Band on a month long U.S./Japan Tour and up-coming dates with The Carl Allen Quintet) and as an in-demand sideman (recent recordings with Terence Blanchard and Joe Henderson, Eric Reed, Vincent Herring, and many others).

What others are saying about Carl Allen:
“Aggressive without being intrusive, Allen balances the back-and-forth swaying of his rhythmic ideas with hard-boiled swing.”
-Peter Watrous New York Times

“…Allen – a physical, hard swinging drummer of the Art Blakey school – pushes his band mates to abandon their cool reserve so they can testify as if shouting out in church…”
-Geoffrey Himes Washington Post

“More than just another fine young drummer, Carl Allen has it together as a band leader, businessman and producer, becoming a force in today’s jazz world.”
-Sid Gribetz JazzTimes Magazine